The story so far

From 1891 to the present day, the Machrie has always represented the best in natural Scottish links golf.

The Machrie was founded in 1891, when the original course overlooking Laggan Bay on Islay’s south-west coast was laid out by Willie Campbell.

The course has changed many times over the decades. The route we play today represents the latest stage in The Machrie’s long and gradual evolution, and was brought up to modern championship standards by DJ Russell from 2013-18. But it has never lost its charm. 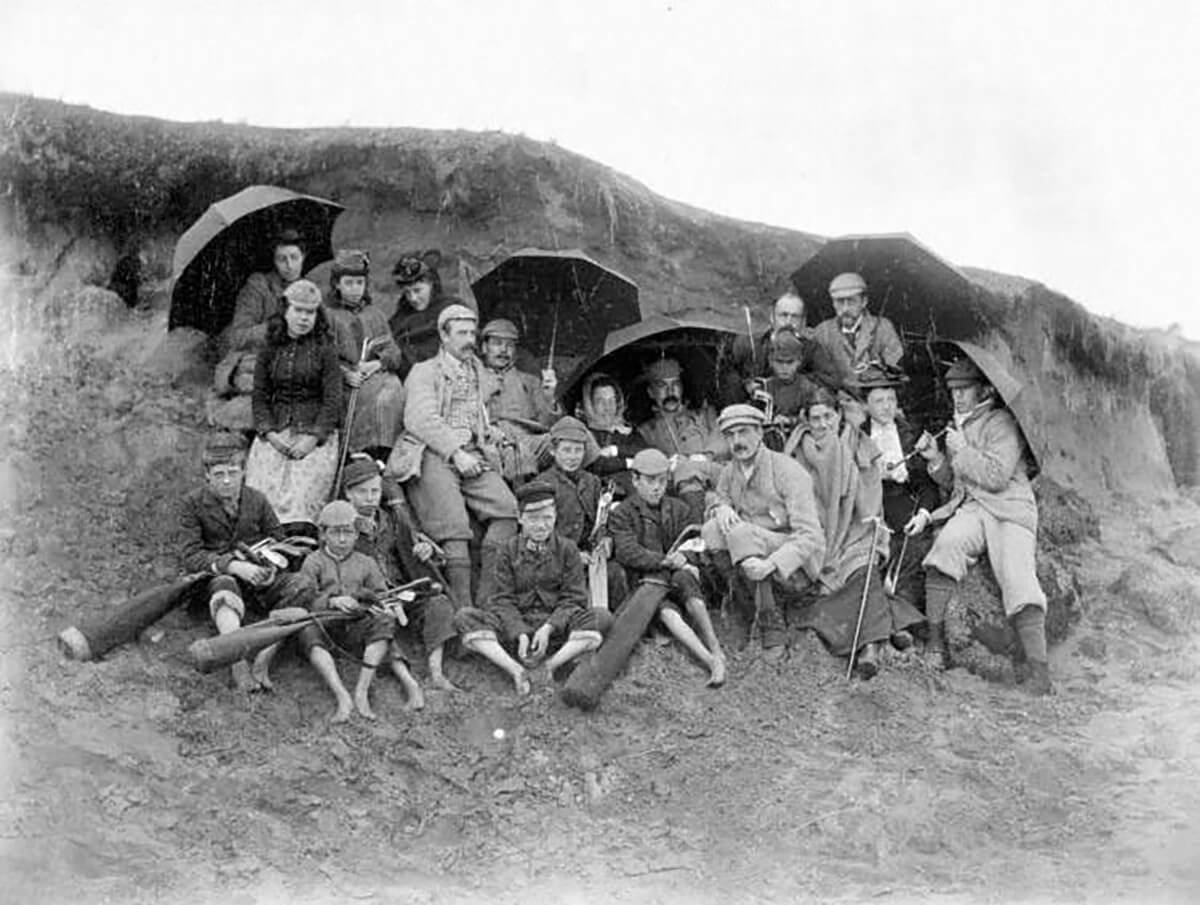 Willie Campbell, golf professional at Prestwick, and designer of the Machrie and Brookline Country Club, Boston

Born in Musselburgh, Campbell was professional at Prestwick in the 1880s. A perennial contender at the Open Championship, he finished no worse than 11th in any of his 10 appearances. He was reduced to tears in 1887 when a bunker on the 16th cost him the Open.

In 1891, he spent only two days on Islay designing a course. He concluded: “This place was made for gowf.”

Golf in the early days at the Machrie

The course officially opened with a match between Campbell and the 1883 Open champion Willie Fernie. Fittingly, the architect triumphed.

The course he left amid Islay’s wild dunes was one of a kind.

Laid out across, not along, the dunes, it was a throwback to the days when blind shots were considered essential in a great seaside course. 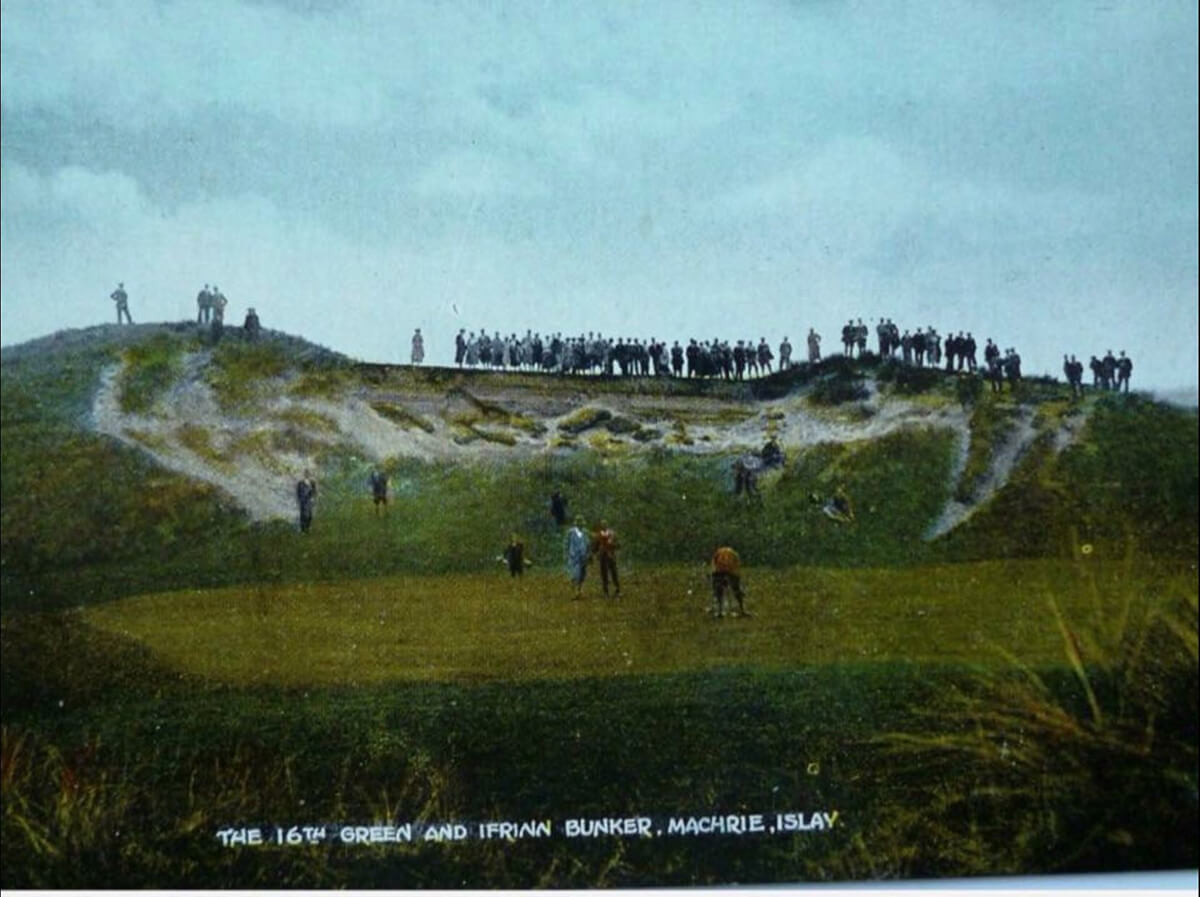 The Machrie’s reputation was quickly established and in 1901, the Great Triumvirate of Harry Vardon, JH Taylor and James Braid, who amassed 16 Open Championships between them, came to Islay to play a challenge match that was followed around the world. The prize money of £100 was, remarkably, the richest prize in golf up to that date.

Campbell emigrated to the US, becoming a leading designer of his era, and building the great Country Club at Brookline in Boston.

Willie’s wife Georgina Campbell is documented as the first ladies golf professional in the USA. Georgina followed in her husband’s footsteps after his death and was appointed instructress at Franklin Park. She had previously assisted him in the shop and in teaching the ladies and went on to also instruct at Wellington Hill. 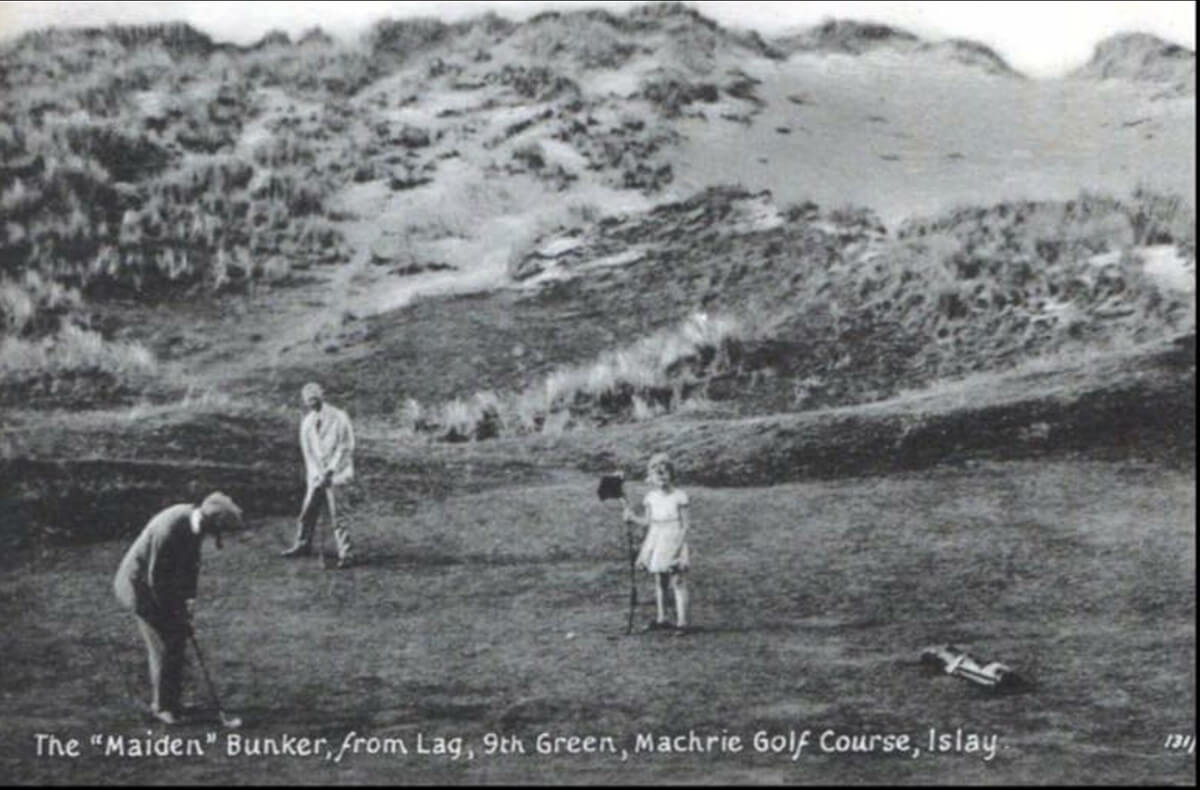 The Machrie was redeveloped on several occasions from the 1920s onwards, most notably when a local farmer reclaimed some original land in the 1970s. But it always remained the home of the Islay Golf Club, which has staged the famous amateur competition known as the Kildalton Cross since 1900.

Although a quintissential 19th Century Scottish links, the Machrie was, by modern standards, unfair and sometimes confusing. There were also safety concerns to consider with no fewer than 17 blind shots on the layout. 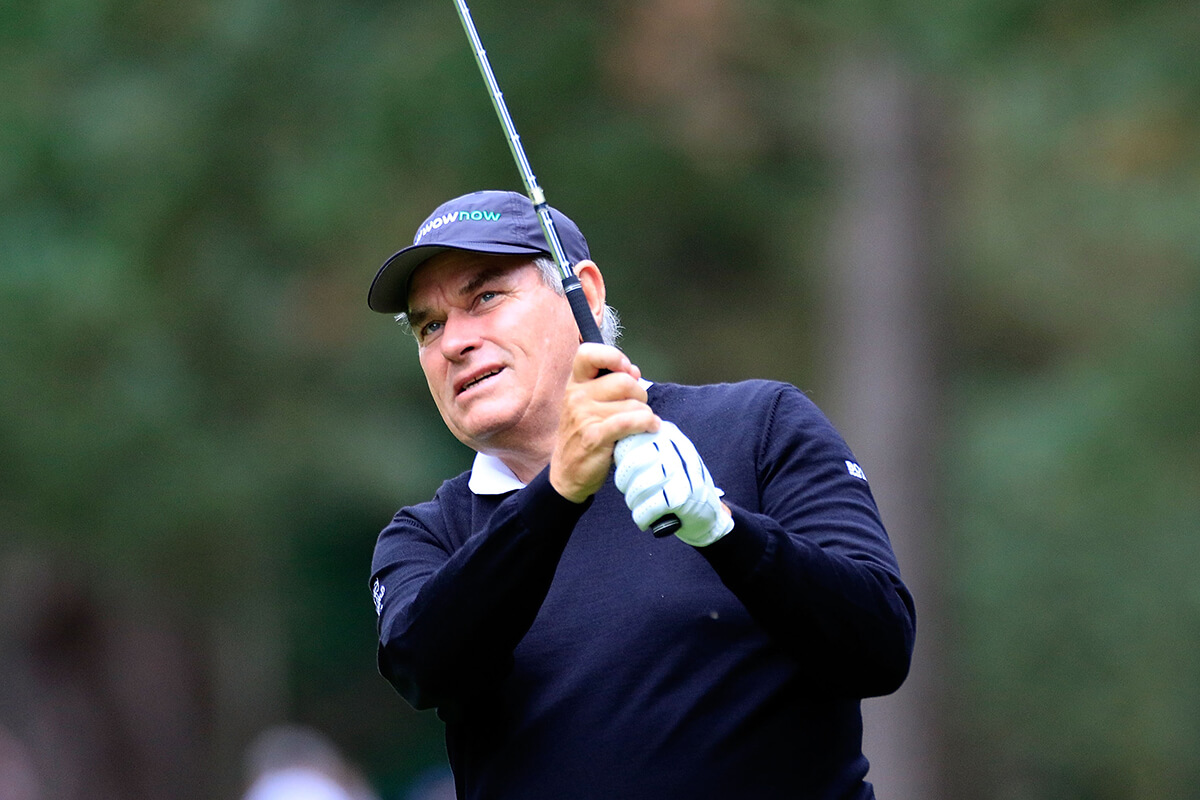 D.J. Russell, Ryder Cup vice captain in 2006 and designer of both courses at Archerfield Links

David J. Russell, a majestic ball striker, played 466 European Tour events from 1973-96, winning the Lyons Open in 1992 without dropping a single shot in 72 holes. He became the youngest player to have a hole-in-one in the Open Championship at the Postage Stamp, Troon in 1973. By an extraordinary coincidence, his feat was replicated 45 minutes later at the same hole by Gene Sarazen, who became the oldest player to achieve an ace. David finished 11th in the Open in 1988.

“I was brought in to tweak the golf course in 2013”, says DJ. “But it soon became clear that we could do something really special”.

“We gradually pieced together how to put 18 quality golf holes along the original layout.”

In 2018, the redesigned Machrie was revealed to the world.

“I think the whole experience has been an incredible coming together. We have a Course Manager who had worked for 17 years on one of the best links golf courses in the world in Muirfield. We had a construction team, Edinburgh Landscaping, who have built some of the finest modern golf courses, on site for four and a half years. This created an incredible opportunity for me to be able to show what was possible on this wonderful links land.”

“It’s a real links experience with wonderful dunes, dramatic changes in elevation, and the ever changing Islay weather.”

“It’s links golf as it used to be where the ball is played much closer to the ground than the modern game demands.”

“It’s an incredible experience. It’s taking the time to take your time. The solitude makes it your own private place. You come over to Islay and it’s like the world has taken a big deep breath and you’ve time to do things.”

DJ’s vision was clear from the start. “It really is a spectacular site for a golf course and from my perspective it was vital that I made the course a lot fairer than it was.

“It was a wonderful golf course but one with many blind shots and it was very important that I made it a more pleasurable experience for everyone.

“It was also a very demanding test of golf. You were playing blind tee shots: so you were hitting tee shots over a marker pole and then, if you were lucky enough to find your ball when you got over there, your second shot was over another marker pole.

“There’s a place for that but probably not on every hole.” 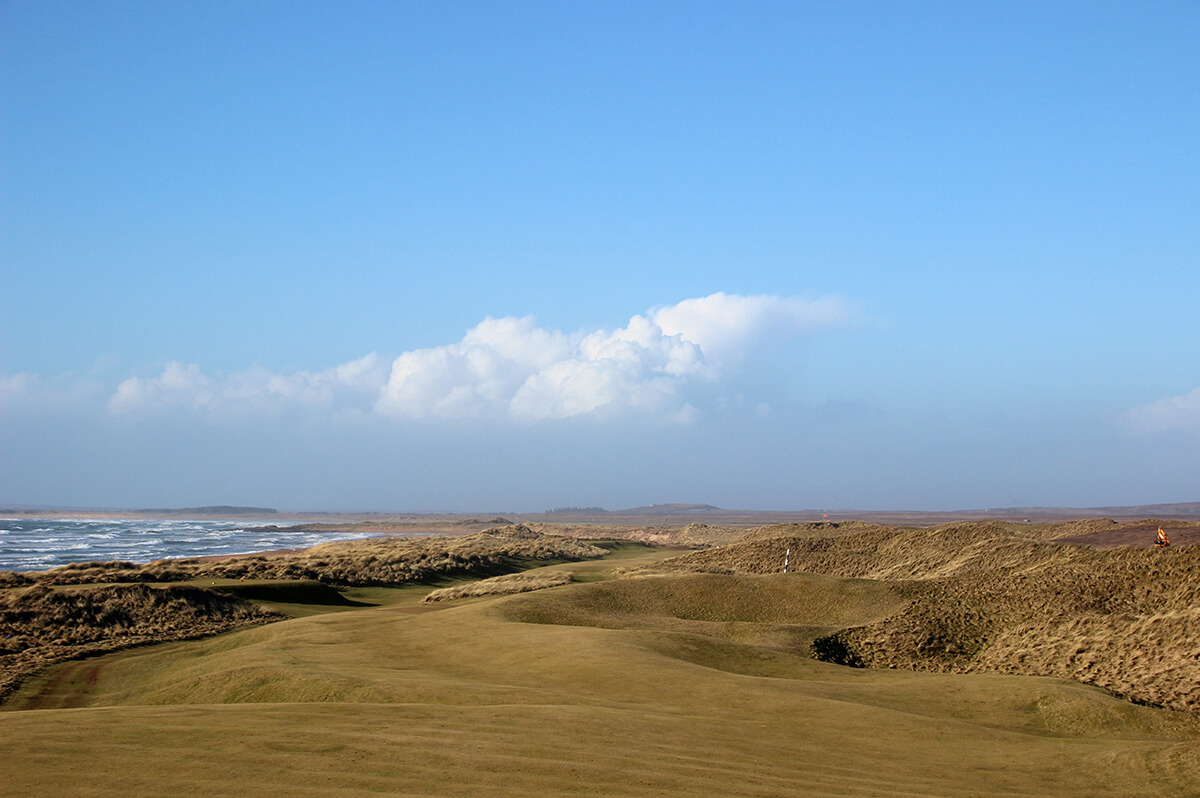 A classic blind approach on the old Machrie

DJ has certainly succeeded in making The Machrie a course that rewards creativity and the art of shot-making, whether that is in riding the wind on a downwind drive or skilfully executing a chip-and-run from a tight lie.

“With the strong Westerlies that can kick in, I think it’s very much a golf course that is a throw-back to the days of being able to play more along the ground or close to the ground than you need to now,” he said.

“It’s distance control, being able to pull a 7-iron out and nudge it along the ground.

“I always remember the shot Seve played on the final hole of the 1976 Open at Royal Birkdale where everything was burnt and there was a lot of short grass, he had a chip between the bunkers on the 18th, he ran it between the bunkers and put it close to the pin.”

“Modern golf with the irrigation systems and more rough around the greens has taken a lot of that skill away. Modern players in the same position today would probably get out the 60-degree wedge and lob it in.”

“The Machrie rewards traditional skills that allow you to play those bump-and-run shots.” 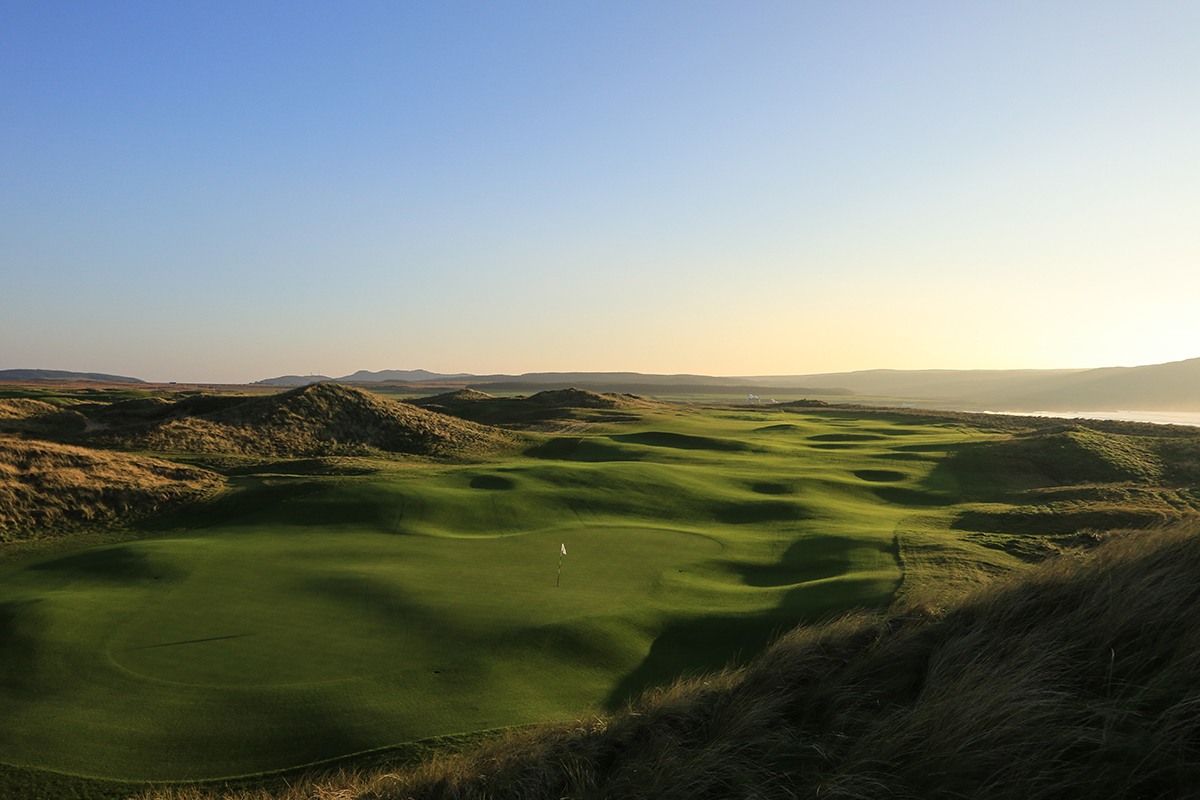 From the right angle, the flag is usually visible for the approach shot now

The result is a course that, crucially, can be enjoyed just as much by the first-time visitor as it can by those lucky enough to call The Machrie their home course.

“When you drive in to The Machrie, it’s hard to believe that behind the hotel and clubhouse there is going to be this incredible links land.”

“I’m very proud that people are blown away by what they see.”

“There are not many golf courses that have the same aura. It’s a very special place,” he said. 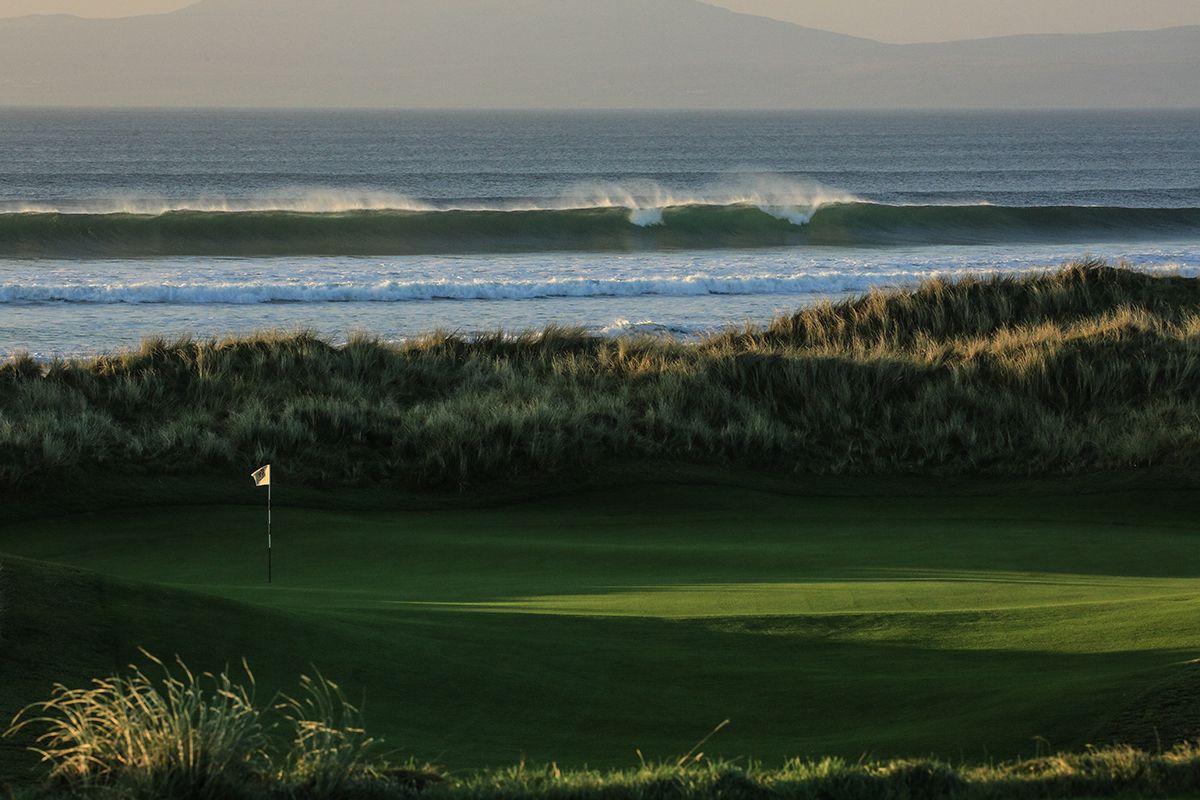 The short 9th, played towards the ocean

My favourite hole will always be the par 3 9th, this was where it all started on my first visit.

Speaking to Islay Golf Club members about the original golf course and its views, took me to the top of this sand dune looking towards the sea where I pictured a brand new short hole.

Framed perfectly and exposed to the elements, even at 140 yards it can vary so much from day to day. 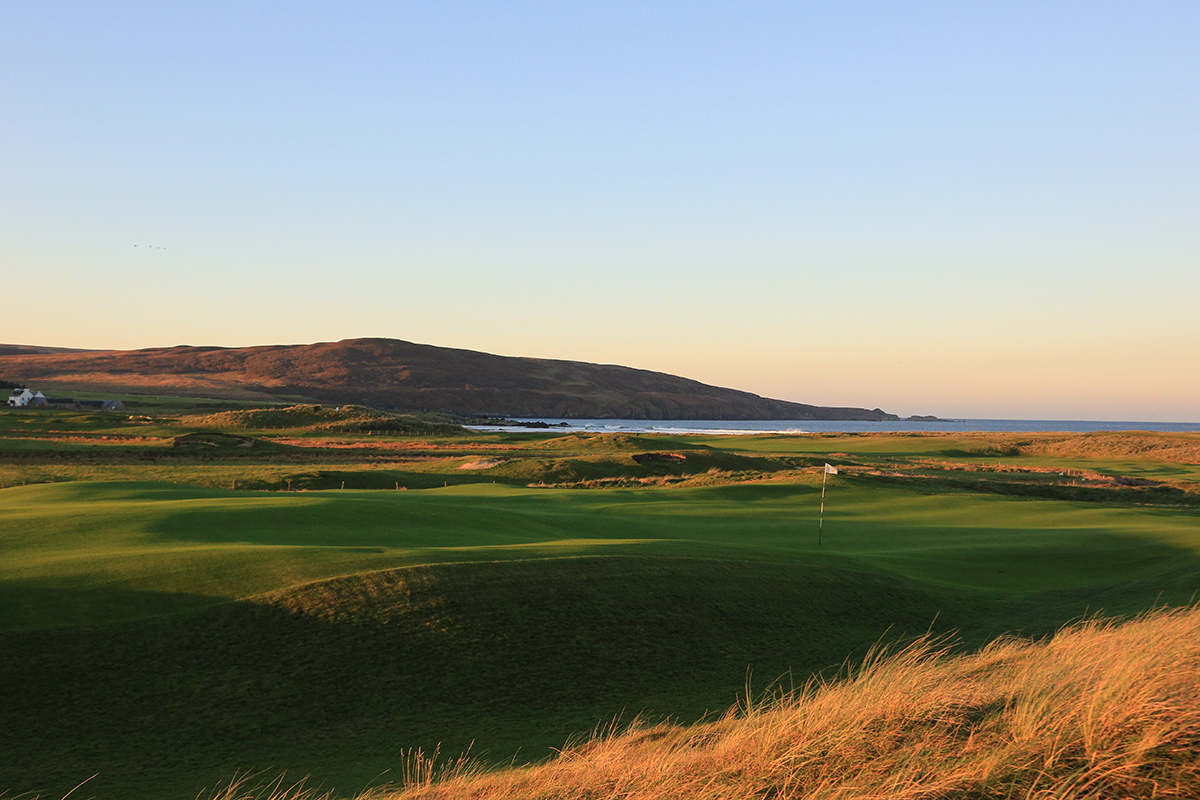 The 1st green – now approached from a completely different angle

How the 1st is the same but very different… 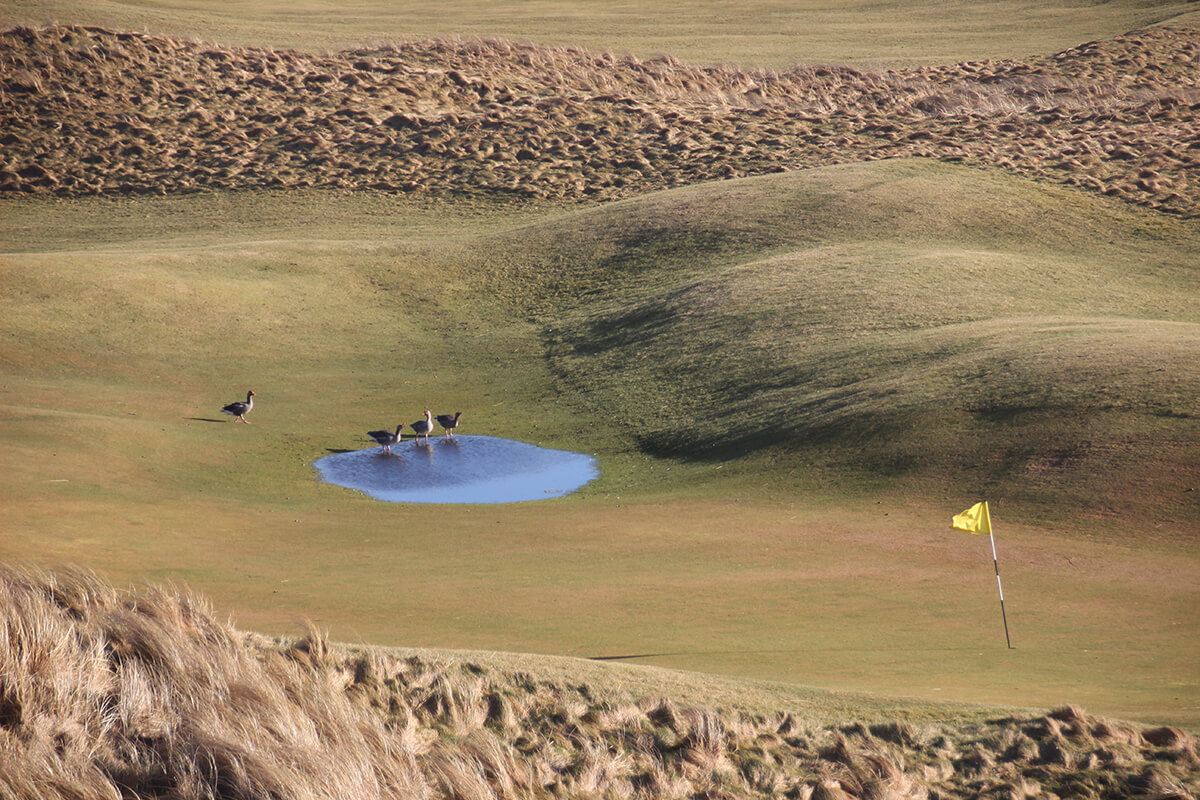 On the seven surviving greens…

The 1st, the 4th and the 7th greens we retained the original greens, as they worked well within the routing.

These greens have changed slightly, in that we mowed out some of the original areas and made bigger putting surfaces creating more interesting and challenging pin positions.

The original greens were built in hollows back in the day, and generally they found the wettest place they could. This philosophy prior to watering systems was hugely beneficial in summer months but caused them to flood in wintertime.

The 6th, 12th, 15th and 17th, were rebuilt on their original sites but where necessary raised by up to two metres, to make The Machrie playable 52 weeks of the year. We almost never have any standing water on the course, whatever the weather gods throw at us. We expect guests to be welcomed by firm greens and fairways on most days of the year. 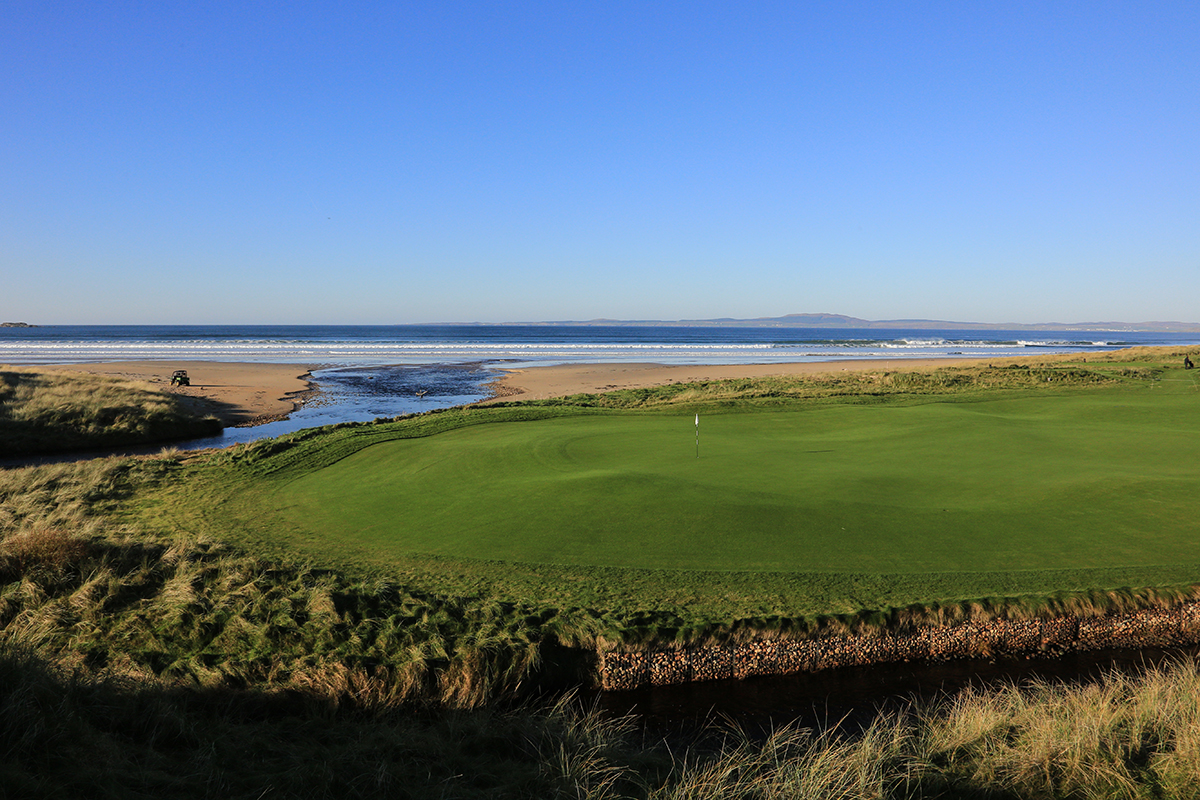 The green at the par-5 2nd is spectacularly situated

Where to find the best views…

The view when you come up the 1st hole is something special, as you come over the crest of the hill to play your approach, with the golf course sat there in all its glory.

The 2nd green, 3rd, 4th, 6th, 7th tees are a collection of spectacular viewpoints down on the shoreline.

There are some wonderful views on every hole. Everyone agrees that the 9th tee is one of the great views in golf. 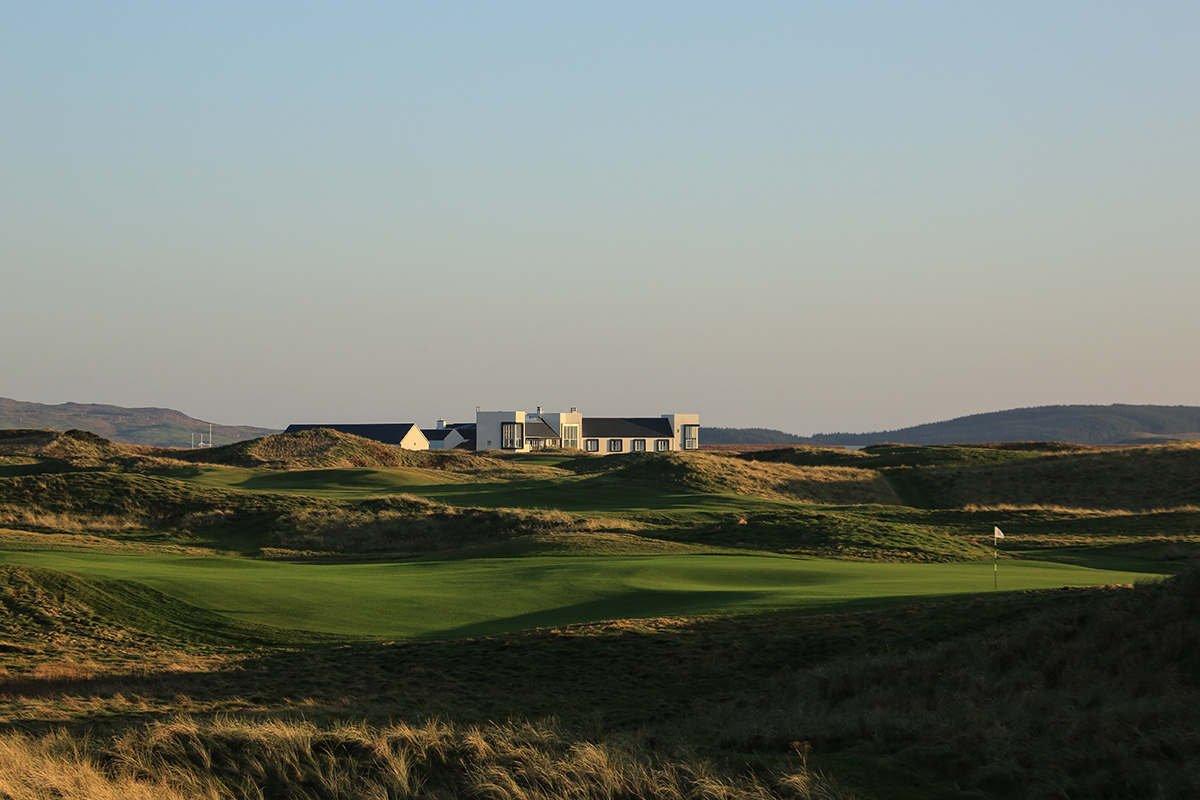 The Machrie is designed to be playable in all conditions

The Machrie will continue to evolve as it has evolved over the last 130 years. I wanted to give it the room needed to do this, with width of fairways and landing areas. Bunkers have been gradually added while carefully considering the fine balance of playability and aesthetics.

It’s very difficult to make a golf hole playable for every day of the year so it was important not to over-step the mark – with so many wonderful places you can put a bunker out there, the land had to be shown respect.